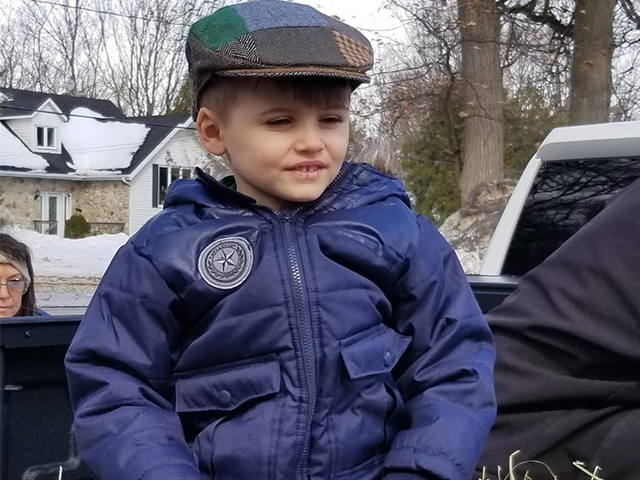 In October 2013, Kevin Reason and Laurie Walker welcomed Liam into the world – a baby brother for Kevin’s 14-year-old daughter, Emily. Liam was healthy and happy, but as he grew from infant to toddler his parents noticed delays reaching developmental milestones. Liam took his first steps at 20 months. By age two he had few words, showed little interest in toys and rarely made eye contact. “We talked to Liam’s pediatrician and were referred to a specialist,” said Kevin. “The next two years were a whirlwind of evaluations during which autism was mentioned as a possible diagnosis.”

Walker did online research and found Little Bright Lights, a clinic specializing in Applied Behaviour Analysis (ABA) therapy. Simply put, ABA uses positive reinforcement to redirect and teach useful life skills to children with autism. Liam started sessions four times a week with Viki McArthur, a board-certified behaviour analyst. “Within months of beginning ABA, Liam was playing with toys and would smile ear-to-ear whenever I walked into the room,” said McArthur. “His repertoire of words grew, and he was using them at home to ask for favourite foods, and began pointing at objects and saying ‘car,’ ‘ball’ or ‘Elmo.’” Kevin and Laurie were encouraged. They were expecting another child, and soon baby Owen was born. The following year, when Liam was four, they received his official diagnosis of autism. “We knew it was coming but it was still tough,” said Kevin. “We were flooded with sadness and concern.”

Liam continued making strides with ABA and started kindergarten. “At recess, he would see kids on the slide and imitate them by climbing the ladder and sliding down – always with a huge grin,” McArthur said. “He would do this over and over until the bell rang.” Reason said he felt grateful for Liam’s inner joy and carefree demeanour.

Then, in April 2019, the couple noticed a change in five-year-old Liam’s gait. He was stumbling around and dragging his left leg. Then he had a seizure. “We rushed him to the Montreal Children’s Hospital, and they kept him for a month,” said Reason. “The seizures continued and baffled doctors who put him through tons of tests and experimented with different medications to get the seizures under control.”

Genetic testing revealed that Liam has mitochondrial disease. Mito Canada defines it as “a group of disorders caused by dysfunctional mitochondria. It can affect multiple energy-intensive systems within the body including the liver, kidneys, pancreas, brain, and digestive tract. The eyes, inner ear, muscles and blood may also be affected.”

“Imagine trying to run your whole house on one small battery,” said Reason. “Liam’s cells don’t produce enough energy to operate all of his body’s systems.” Later, the diagnosis was further pinpointed as Polg (pronounced pole-gee), which is a rare form of the mitochondrial disease affecting balance and cognition. “Seizures are like kryptonite for cognitive development,” Reason said. “Liam had so many and lost all the progress he had made.”

It’s been two years since his diagnosis of Polg and, because of the cocktail of medicine Liam takes every day, he has not had another seizure. He also takes lots of vitamins to keep his muscles strong and eats a diet rich in fats to improve brain function. He still goes for ABA sessions but progress is slow. “Liam doesn't say complete words anymore and can only point, with assistance,” McArthur said. “He can’t go to school because a bad fall could be devastating.”

The long-term prognosis is not good, but the couple is holding onto hope for a cure and have set up the Liam Foundation with the Montreal Children’s Hospital. The goal is to increase awareness about mitochondrial disease and raise funds for a research team and equipment. Recently, Reason and Walker were told about a new medication, to treat Polg, being studied in Europe. They received approval for Liam to be part of a clinical trial, along with five other Quebec kids. The trial will be funded by the Liam Foundation.

Emily Reason is now 21 and studying at Dawson College. “Everything is relative,” she said. “I never thought I would look back, with nostalgia, to the days when my brother just had autism; Polg is so much scarier.” Although he can’t say it in words, Emily feels Liam’s deep affection. “The other day, I was sitting on the couch and he spontaneously came over, snuggled up close to me and fell asleep,” she said. “I just love him so much.”

The Reason family runs like a finely-tuned machine. Walker is a full-time mom to Liam and Owen. Reason is the breadwinner, working long hours as co-owner of a truck dealership and is the family spokesperson. Emily takes care of social media for the Liam Foundation and does fundraising – selling soaps, T-shirts, hoodies, and coffee mugs that feature Liam’s adorable footprints and the motto “Little Steps but Always Forward.” Even little brother Owen, now four, has a role. Because his big brother takes so many meds, Walker has alarms set as reminders. When he hears it ring, Owen will rush over and say, “Mom, it’s time for Liam’s medicine.”

To donate to the Liam Foundation, visit https://fondationduchildren.com/en/fundraising/liam-foundation

Sep 29, 2022
Crossing the finish line of the Montreal Marathon
Heaven, O’Connor and their team of runners ran the...
Read More